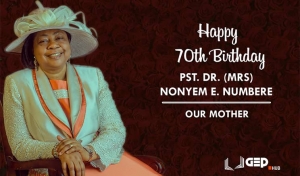 BACKGROUND TO THE VISION

Shortly after Apostle Numbere’s conversion, Pastor S. G. Elton, a British Missionary resident in Nigeria, came to minister in the Campus Christian Fellowship of Ife University. Pastor S. G. Elton was a British missionary who spent most of his time in the Western part of Nigeria working for the Lord. In obedience to the call of God he left his homeland and came to live in Ilesha (Western Nigeria) with his wife and only daughter.

All born again Christians of those days knew that Pastor Elton was not just a man of God but a Prophet of God. He was a mentor to virtually all the pioneer Pentecostal Ministers whom God raised in the early 1970’s in Nigeria.  He could rightly be described as the “Father of Evangelism and Pentecostalism” in Nigeria.  The spiritual burden of this nation and Africa was so much on him that he did not cease to call on God day and night to raise up Nigerians to carry the gospel to their own people. His burden for Rivers State in particular was heavy.

While ministering that night, Pastor Elton, led by the Spirit of God called Numbere out and prophesied over him that, The hand of God is upon you. God is going to call you and send you to your people. His anointing is upon you and you shall be a mighty instrument in His Hand.

Being a brand new Christian, the young student did not understand. But God was going to visit him in a way he never imagined. God visited him and gave him a vision so clear, so vivid that he could never ever forget even if he tried.

THE VISION AND THE COMMISSION

On the 3rd of March 1970, Numbere knelt by his bed to say a short prayer before going to his lectures, a practice with him after he became born again.  Suddenly he was caught up in a trance (vision).  The Lord Jesus appeared and stood by him.  Together they were rocketed like a spaceship into the first heaven.  At the prompting of the Lord, Numbere looked down.  He saw spread before him a vast open plain.  The entire plain was filled, jam-packed with human beings in a stooping, kneeling position with faces on the ground (like the posture of Muslims in prayer).

Without a single word from the Lord, they shot up into the second heaven. The horizon extended; so did the plain. Again this same crowd of people, in kneeling, face down posture filled the space – an innumerable crowd of people!  At this point, frightened by the sight, Numbere broke loose and started running away from the Lord. He was allowed to run until he was tired.  The lesson here is that if the Lord has called you and you are on the run, there is no distance that you will get to that the Lord’s Arm cannot reach you.  Jonah tried it and did not succeed; Apostle Numbere tried it and did not succeed.

Then the Lord stretched out His right hand from where He stood and as would a forklift, picked him up and placed him by His side and together they again shot up into the third heaven.  Now the higher you go, the farther you see into the horizon.  At this point the crowd was simply unimaginable, with all of them still in the same kneeling face down posture.

Then the Lord spoke to Numbere to look again at this crowd and said to him, “These are all My creatures that are perishing.  It is not My pleasure that as many as these of My creatures should perish”.  Numbere asked the Lord, “What would you want me to do?” “Go, raise their faces that they may look up to Me and that they might live,” replied the Lord.  To another question as to where he might start from, the Lord replied, “Anywhere”. The Lord’s parting words to him were “I have chosen you, but be humble”.

Numbere came out of this Vision and discovered that he was still on his knees in his hostel room.  One full hour had lapsed and he had missed his lectures.  He sat back on his bed, pondering over this vision over and over again.  All his interest in academic pursuit was lost and he knew his days in the University were numbered. He left the University at the end of the session and went up to Northern Nigeria and picked up a teaching appointment in the wilderness of Gumel, Kano State (now in Jigawa State), a predominantly Muslim enclave.  There he led many souls, especially Muslims, to the Lord and started the first Christian Church in his parlour which he later handed over to the Evangelical Church of West Africa (ECWA).  From then on to 1972 (three full years) the Lord appeared to him several times, teaching and instructing him and preparing him for the great task ahead (For details see A MAN AND A VISION – Nonyem Numbere).

Numbere returned home to Rivers State in July 1972 and based in Port Harcourt, he started out as a street preacher.

On the 9th of September 1972, at No. 12 Nkwerre (now Igbodo) Street, old GRA, in the course of an all-night group prayer meeting in Port Harcourt, with a few faithful mostly teenagers, who had believed his message, the name, “GREATER EVANGELISM CRUSADE” was repeatedly mentioned by the Lord in his ears.  At the end of the prayer meeting, this message was shared and GREATER EVANGELISM was born that very night! Some of those he shared the message with were, Elder Eluan E. Akpana, Evangelists Fubara Ibama, Ben Iloh and Iloye Warmate (nee Major).

Some days later, the Lord gave him the motto: “TO KNOW JESUS AND TO MAKE JESUS KNOWN”. On the 6th of December 1972, the Lord gave him the emblem, again while he was on his knees praying. The emblem was the globe (the world), with the cross spanning it and dropping on Africa, with Nigeria in the centre. He sketched the emblem as the Lord was showing it to him and wrote about it while still on his knees: “The Lord showed me in a vision, the Globe (that is, the world) slightly bent in space, intensively lit, shinning as though there was flood light over it, and Africa emphasized before me. The Holy Ghost interpreted it to mean that Africa was emphasized”.

The Vision was clear – Greater Evangelism has three main phases of her mission just like the Vision of Apostle Numbere’s commission in which the Lord took him to three tiers of heaven.  The Ministry is to span Nigeria, Africa and the rest of the world.

With just the scanty clothes on him and a raffia bag containing his Bible and tracts as his only earthly possessions, he struck out to the field, beginning with Rivers State, his own Jerusalem and Judaea. Accompanied by a few dedicated young men and women, his first thrust was into Ogoniland. Amidst much opposition and persecution and denigration even from the few Christians there were then, he moved on, taking the gospel to every hamlet, every nook and cranny, to the downtrodden, underprivileged and forgotten people of the numerous islands and villages of Rivers State. From Rivers State the Ministry has reached out to other States of Nigeria and is now into other parts of Africa.

True to his call as an Apostle, Numbere refused to be an armchair spiritual general who would send people to places he would not go.  Rather he has always led his team by himself, going to places where others fear to go.  Willing to die for the gospel, he has faced so many hazards, working under sun and rain, night and day, trekking though forests and mangrove swamps, travelling in hand-pulled dug-out canoes or open boats, daring the winds and waves of the sea, and fearing neither man nor beasts.

The whole State was in spiritual darkness.  Idolatry was part and parcel of the people’s life and they worshipped all kinds of things ranging from big trees to snakes (especially the python) to marine spirits to even snails.  The powers of darkness reigned supreme as juju priests and native doctors exploited the ignorance of the people, putting them under terrible satanic bondage. Apostle Numbere was therefore in for a stiff battle as he launched out with the Gospel to his people.  He and his team had no manuals on spiritual warfare, they had nothing by way of physical comfort, but they had one thing – they had a “Vision” and they had faith in the One Who gave the “Vision”.

In many places juju priests and witch doctors sent threats to him not to preach the gospel in their villages.  When their threats could not stop him they resorted to using their satanic powers to harm, paralyse, or kill him outright.  Of course, they could not succeed and their failures would result in the conversion of many including the juju-priests themselves.  A couple of times he was shot at.  Sometimes hostile communities had stoned him and the team or attacked them with knives/machetes.  Dr. Uzodinma Obed of Glory Tabernacle, Ibadan, summarised that great spiritual warfare of the pioneering days of Apostle Numbere and his Ministry thus:

God used Apostle Numbere to fight basic spiritual and physical warfare in the land, fighting the demons to a standstill, contending with the occultist people and the cults and bringing them into submission to the Lord Jesus Christ. When there were as yet no manuals and teachings on demonology and spiritual warfare, he (Apostle Numbere) put satanic forces to flight.

Greater Evangelism World Crusade is a Vision, which started with a man, Apostle Geoffrey Dabibi Numbere. He had a Vision and he ran with it.  He shared the vision with others, and those who dared to catch it ran with it. Today, under the leadership of Pastor Isaac Olori (International Director, GEWC), many more have caught it and have run with it. Yet there are those, though here, who do not know the vision and there are many that will come who are yet to know the vision. As long as Jesus tarries, they will catch this vision and run with it!