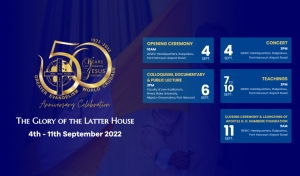 The 50th Anniversary Celebration of Greater Evangelism World Crusade is approaching it's finale. Join us for any of these activities. 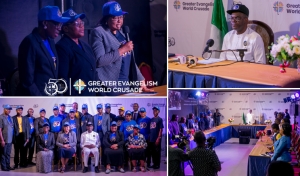 I want to welcome members of the press and the public to this International Press Conference organized by the Ministry of Greater Evangelism World Crusade to address the world as regards its 50th Anniversary Jubilee celebration.

Greater Evangelism World Crusade was founded on Saturday, 9th September 1972 during an all-night prayer meeting in Port Harcourt, the Capital City of Rivers State, Nigeria. The name, the logo, and the motto (To Know Jesus and to Make Jesus Known) were all given by the Lord through a vision. Amid much persecution, opposition and difficulties, the Ministry pioneered indigenous Pentecostal evangelism in old Rivers State (now Rivers and Bayelsa States) of Nigeria in the early 1970s.

The Founder and Pioneer International Director, Apostle Geoffrey Dabibi Numbere (1944-2014) was born again on Sunday, 11 May 1969 at the University of Ife, Ibadan Campus (now Obafemi Awolowo University, Ile-Ife, Nigeria) where he was then a student of Geology. On 3 March 1970, he received the call of God for full-time service through a Vision in which the Lord Jesus Christ took him up to three heavens and showed him crowds and crowds of perishing souls, with faces on the ground. The Lord commissioned him to go and lift the faces of those people to look up to Him and be saved. For these years, the thrust of Greater Evangelism World Crusade has been the virtually inaccessible Eastern Delta Region of Nigeria, reaching the unreached for Jesus Christ by taking the glorious gospel to the downtrodden, underprivileged, and forgotten people of the numerous islands and villages and those in the cities and towns of old Rivers State (now Rivers and Bayelsa States). By God’s grace, the Ministry has spread to various parts of Nigeria, Africa, the United Kingdom and USA. Greater Evangelism World Crusade has affected many lives, leading thousands, and thousands of people to salvation through Christ Jesus. In addition to preaching, we had published several Christian literature and literary documentation of the history of the Ministry which has provided knowledge of indigenous church history. The landmarks on the history of the Ministry have just be updated by the wife of the Founding International Director.

The Ministry has been transformed through the restructuring of her operational modalities for sustained growth and expansion capabilities in all the National and Foreign Missions. We have extended the frontiers of the television ministry through the platform of the Caught Up Television (CUTV) which is reaching many more souls in line with our Vision. In the same vein, the Ministry had enriched the devotional literature of Christians and non-Christians alike through the quarterly Greater Height Devotionals materials.

To Reach Everyone, Everywhere With The Glorious Gospel Of Our Lord Jesus Christ.

To Know Jesus, and To Make Jesus Known.

And you shall consecrate the fiftieth year, and proclaim liberty throughout all the land to all its inhabitants. It shall be a Jubilee for you; and each of you shall return to his possession, and each of you shall return to his family. Leviticus 25:10 Attaining fifty years is a major milestone in the life of any person or group of persons. In scriptures, the year of Jubilee, which came every 50th year, was a year of releasing God’s people from their debts, releasing all slaves, and returning property to who owned it (Lev. 25:1-13). It afforded everyone the chance to start the Jubilee year with a clean slate; as everyone was released from debt and slavery, and everyone had the privilege of entering into rest, God’s rest. Some of the specific benefits of the Jubilee year include:

The takeaways of Jubilee are still very much relevant today. While the children of Israel had to wait every seven years or fifty years to experience their release from slavery and servitude, today we can experience our spiritual Jubilee every day and every moment. Jubilee was foreshadowing the work of the cross. The sacrifice of Jesus Christ on the cross provides the basis of Jubilee today. Through the death and resurrection of Jesus Christ, He made provision for the relief of all spiritual debts and our slavery to sin. As we commemorate this spiritual milestone as a Ministry, our desire and task are to awaken the public to the Jubilee that Christ has accomplished for humanity.

ESSENCE OF THE CELEBRATION

We are celebrating our 50th Jubilee in appreciation to God who gave this Vision and sustained it till this time. In view of the myriads of challenges and oppositions faced, only God could have brought us to this point. He has been our help in ages past and He is our hope for years to come. As a Ministry, even with the home going of our Founding International Director, we have remained focused, reenergized, intact, and connected with the passion of fulfilling the mandate. We are also utilizing this celebration to renew our commitment to the Vision the Lord gave to us to lift the faces of people to look up to Him for their salvation through the preaching of the true Gospel.

Greater Evangelism World Crusade is God’s rescue boat to deliver people from the bondage of the devil by declaring the truth of the Gospel of our Lord and Saviour Jesus Christ. This we will do consistently as the Lord grants enablement because staying focused on this mission will afford us the opportunity to reenact our next phase as a Ministry.

IMPACT OF THE VISION OF GEWC TO THE SOCIETY

Over the years, the Ministry of Greater Evangelism World Crusade has been mightily used by God to bring salvation and light to many people and communities. Greater Evangelism pioneered indigenous Pentecostalism in Rivers and Bayelsa states through its Gospel campaigns and outreaches of the 70’s and 80’s. Those were the periods when whole communities were under the darkness of idolatry and satanic bondages. Greater Evangelism was God’s instrument to deliver thousands and thousands of people from the slavery of sin and the devil. Our Founding International Director, Apostle Numbere and his team confronted the demons, darkness, and evil traditional practices of those days and won the victory for the Kingdom of God. Also, this Ministry was a vanguard to awaken the churches of those days from their slumber and cold religious nominalism and formalism. Apostle Numbere and his team saturated the city of Port Harcourt and its environs with the true gospel of Christ in the most charismatic manner with boldness and courage and turned the city upside down with their brand of “born-again” messages. Their preaching positively influenced the society and won many souls for God. Indeed, generations of believers have been raised through the Vision of this Ministry.

As a Ministry, we have invested not only preaching the true gospel of our Lord and Saviour Jesus Christ but also in defending the purity of the gospel as given by Jesus Christ and His apostles. The menace of false prophets and teachers with false and/or half-truth are always present, but we are unrelenting in our resolve to contend for the faith by bringing to the fore the errors. The Ministry was and is still known for this and it is a tradition that will be maintained by every generation of this Ministry.

The Ministry was in the forefront of the advocacy of dismantling all forms of idolatry in the old Rivers State (now Rivers and Bayelsa States) as expressed in their monuments. This was achieved through the doggedness of the Ministry. Permit me to also emphasize the role Greater Evangelism World Crusade played in the salvation and spiritual development of the youths. Most of the first adherents of the message preached by Apostle Numbere were the youths and teenagers. These young ones were caught for Christ at an early stage and were great instrument in the hands of the Lord and blessings to the society rather than being nuisance to society. We make bold to say that there is hardly any Christian Ministry in Nigeria where you will not have a member that has be impacted by GEWC. In the same vein, the Ministry impacted several university campuses through the ministration of Apostle Numbere and presently, our campus Ministry, Greater Evangelism Campus Crusaders (GECC) is promoting values of righteousness among the student and staff population in many higher institutions in Nigeria and some African Countries. The impact is huge despite the cost to reach out to the youths of that generation and present to save them from eternal damnation and make them better citizens.

Our social responsibility in education is worthy of note, we have established schools with minimal charges for children of both the poor and well-to-do in various parts of the Country. The quality of these children in terms of academics and morals are phenomenal. We are a mission that cares for the total man as captured by our Mission Statement. For these fifty years of our existence, the Ministry has carried out other social interventions and community services to reach out to the deprived, hurting, and downtrodden.

The Ministry had always been faced with several societal challenges, at the beginning, we were confronted with idolatry, ungodly traditional practices, ignorance, etc. Presently, the society is inundated with new and complicated vices such as but not limited to:

We are poised to confront these societal challenges which indirectly affect the Church through our renewed commitment to preach the truth of God’s Word and raise advocacy to the political leaders to rise to the demand of governance in the Country and various states of the Nation.

WHERE ARE WE GOING? - NEXT PHASE

The Ministry of GEWC is set to enter her new phase through concerted activities geared toward reversing the ugly trends in the society and remaining relevant to the new generation. The next phase of the Ministry will have the following engaging activities and operations:

To commemorate our 50th Anniversary Jubilee celebration, we have lined up several impactful programmes which will culminate in the week of our Anniversary (4th to 11th September 2022).

These programmes begun in earnest with the “Divine Visitation” Crusades held in Rivers (Bonny, Ahoada, Bori, Port Harcourt) and Bayelsa states. These crusades were organized to win souls for God and renew the Ministry in a core aspect of its vision which is soulwinning. Also, there was the Anniversary Mega Rally which took place on Sunday, 31st July 2022 in Port Harcourt and other major cities where GEWC is represented. Indeed, it was colourful and joyous procession to sound the trumpet of our 50th Jubilee and create public awareness of the Ministry and the Anniversary.

Highlights of some of the events of the Anniversary week are:

I want to use this opportunity to invite the public to join us in our 50th Anniversary Jubilee celebrations. We are sounding the trumpet of Jubilee and calling everyone to come join us because God has a special Jubilee blessing for everyone.

Thank you and God bless you. 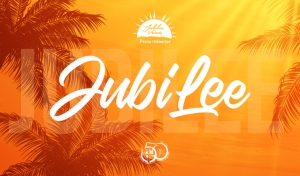 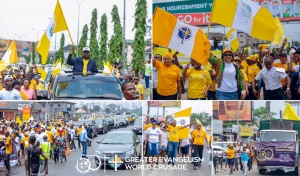 The sound of rejoicing rang through Nigeria. Across major States in Nigeria like Abuja, Lagos, Akwa Ibom, Bayelsa and Rivers State, the city was agog with shouts of joy as members of Greater Evangelism World Crusade took to the streets in celebration of God’s goodness.  The Mega Rally for the 50th Anniversary celebration of the Ministry took place on Sunday, 31st July 2022.

What a beautiful sight to behold. The old and young, male and female, dancing, rejoicing and walking through different parts of their States.

The troop in Port Harcourt was led by our father, Pastor Isaac Olori (International Director), Pastor Nonyem E. Numbere (President, Greater Women Fellowship International) and Pastor Euphemia Porbeni (the Mother of the Ministry). After going through the different districts, everyone gathered at Stadium Road, Port Harcourt where the massive crowd then proceeded to the International Headquarters, Rukpoku.

The 50th anniversary celebration is now in full swing. To God be the glory!