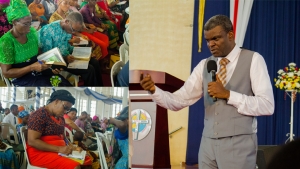 The 2017 March Healing Service was filled with God’s awesome presence and anointing. We heard great testimonies of God’s deliverance of our brethren. One of these testimonies was from Pst. David Kinanee and family, whom God delivered from Python attack. Believing the declaration of God’s servant in the February healing service on God’s protection over our lives. Four days after this service, his family discovered a huge python at home. Since it was dark, his wife and two of his kids had been at home, gone about their chores without realizing there was a python at the door post. It was his third child who thinking it to be a wrap of cloth was at the verge of picking it up, but felt restrained. She decided to beam a torchlight on this strange cloth, only to discover it was a python positioned to strike. At this discovery, she called out to her father who killed the snake. Interestingly, he was questioned by members of the community who said the python was the god of their land. To God be the glory, no one was hurt. Another great testimony was that of Bro. Victor Ekwa, whom God delivered from the habit of smoking (marijuana). The final testimony was that of Pst. (Prof) Apele Iyagba and family whom God delivered from a terrible train accident. On the 25th of February, himself, his wife and son were returning from a funeral and collided with a moving train. There was no sign or notice to indicate a train was in motion. Upon collision, their bumper got hooked on the moving train and would have been dragged along the rail tracks but God intervened. He gave their son (the driver) wisdom and he put the car in reverse gear. This completely disengaged the car from the moving train and the entire family was delivered from a catastrophic incident that would have claimed all their lives.

God’s Word brought to us by the International Director, Pastor Isaac V. Olori, was tagged “Go, Dip Yourself Seven Times” (2 Kings 5:1-17). The subject of the lesson was Naaman, who despite the position he occupied, was a leper. Describing the personality of Naaman, he stated that the prowess of Naaman made him preferred by the people of Syria, as they looked beyond his predicament and endowed him with a high level of authority. This position however could not serve as a covering for his ailment. Comparing the situation of Naaman to sin, he stressed that no situation or sin of ours can be hidden from God. We must realize that just as leprosy, sin overshadows every other possession of a person. Inner purification should therefore be paramount in the life of a man.

Pastor Isaac Olori also analyzed the character of the slave girl, who took her master’s condition with great concern and acted on it. He stated that though the slave girl was a captive physically, she was not a captive spiritually, as she believed in the power of her God and what He could do. She did not let the captivity she was in, make her disbelieve her God. Her attitude was in contrast to the king of Judah, who receiving the letter from the king of Syria became upset and afraid, despite his rank.

Furthermore, he was keen to mention that when God brings forth His Word, we must receive it, believe it and obey it. Total obedience of God’s Word determines if we receive our miracle or not because whatever we do not have regard for cannot bring blessing to us. He also pointed that sometimes, the hindrance between our miracle and us, is the way we think.

Analyzing the importance of Elisha’s instruction, he highlighted the following;

Furthermore, he stated the following as major learning points from the sermon:

Finally, leprosy in the Old Testament signified spiritual defilement and this is the same significance sin has. Until we dip and cleanse ourselves in the blood of Jesus, we remain unclean. Sin in its entirety defiles, deforms, destroys a man, hence, we must maintain a complete relationship with God and surrender all to Him.