The Power Of His Resurrection: 2021 Easter Retreat – Day 3 Featured 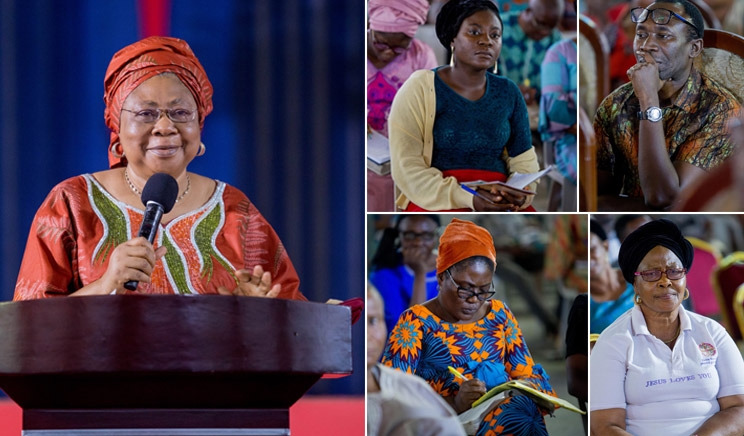 To wrap up today's teachings, the President of the women's fellowship of this great ministry and wife of the founding father, Pastor (Dr) Nonyem E. Numbere gave a talk on the topic “The Power of His Resurrection” (Philippians 3:10-11, Romans 1:3-4 and Romans 8:11).

Excerpts on her teaching can be found below:

Power comes from the Latin word, potere means “to be able” but things with power are much more than able – they are able to exert a lot of force (Vocabulary.com).  It also means “possession of control, authority, or influence over others” (Merriam- Webster dictionary); physical might.

The word, “His” in the topic refers to Jesus Christ, the Son of God, the King of kings, Lord of Lords and “the first begotten (first fruit) of the dead.” His death and resurrection form the bedrock(foundation) of the Christian faith. The atonement for our sins was done on the Cross but breaking the power of death and captivity to sin and Satan was accomplished by His resurrection. Alleluia!

Resurrection (Grk – anastasis) means “a standing up again” or “rising.” It includes not only coming back to life but a rising from the grave. There were a few cases in the Bible of the dead coming back to life e.g., the son of the widow of Zarephath, son of the Shunamite woman, the unnamed man whose corpse came back to life on touching Elisha’s dead bones, Jairus daughter, Lazarus etc., but all of them eventually died and returned to the grave.

The Resurrection of Jesus Christ is unique in that it is the only one without a human agent and is forever. He rose from the dead by the power of God and the Holy Spirit (Acts 2:23-36, Psalms 16:10, Romans 1:3 – 4)

Power was needed for Jesus to rise from the dead. It was an act of the triune God. One can therefore say from the above refs that the power of the resurrection came from God the Father, Jesus Himself. It was not possible for Him to be held down by death he also said that He had power to lay down his life and power to pick it up) the Holy Spirit.

The Cross and the Resurrection

On the Cross Jesus cried out, “IT IS FINISHED” (John 19 :30). The Greek word for this is tetelestai and it was a word that was used in several ways – a task was finished, a sacrifice offered fully, a masterpiece completed and in commerce it was often written across a bill to indicate that the bill had been paid in full. The Resurrection is the receipt to show that Jesus paid the price of our sins in full. And the evidence that God had accepted His work of redemption. The Resurrection is the hope of all believers that we too shall resurrect and live eternally with Christ.

What if Jesus did not rise from the dead? We will still be under the Law and offering sacrifices that cannot not solve the problem of sin and death. Satan would have been celebrating because there would have been no escape for man, but thanks be to God, an empty grave was there to testify that Jesus rose from the dead and the disciples were witnesses to that effect. Without it, Christianity is nothing (1 Corinthians 15:12-19).

Accounts of The Resurrection

Results of The Resurrection

Apostle Paul had experienced the power of Christ in his life and in his ministry, yet he felt he was not close to Him as he should. He craved for closer intimacy with Christ to experience His power fully and also to die like Him or have a joint partnership in His sufferings.

The resurrection power of Christ is not found in idols like the so-called anointing oil, or “die by fire prayers”, or in worldliness. He has made all provisions for us. It was finished on the Cross and exhibited by His resurrection.  Paul made his choice. What is yours?

More in this category: « Book Review – “I Forgive, For My Sake” by Apostle Geoffrey D. Numbere Once I Was Blind »
back to top