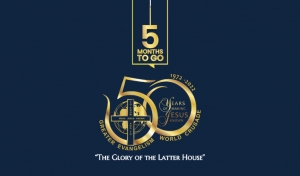 As we continue the countdown to 50, Pastor Isaac Olori, and the Ministry of Greater Evangelism World Crusade begins the 2022 Crusades in Bayelsa State, Nigeria from 4th to 6th March 2022. Glory to God!

It was in March 1973, the field team, led by Apostle Geoffrey D. Numbere (of blessed memory), set out to the field, systematically reaching out to every village and community in Bayelsa and Rivers State in Nigeria. No community was too remote and despite the harsh conditions, they reached out to every one and won souls for the Lord. Excepts from “A Man and A Vision, a Biography of Apostle Geoffrey D. Numbere" below.

…He got a map of the old Rivers State (now Rivers and Bayelsa States), and on 9th March, 1973, with his team of dedicated young men, women, boys and girls; he set out for a systematic evangelization of the whole area. The field team consisted of a few volunteers who were convinced that God had called them into the Field. … As time went on, more people joined them in obedience to the call of God. Amidst much persecution, opposition and difficulties these brave young men and women moved to every nook and cranny, to the downtrodden, underprivileged and forgotten people of the numerous islands and villages of Rivers and Bayelsa States.

It is difficult for one who does not know the topography of the Rivers and Bayelsa States to appreciate the hazards involved in those journeys. These two states are situated in the Eastern Delta of River Niger. The northern part often referred to as the upland region is made up of small towns and villages most of which are interspaced between thick equatorial forests. There were hardly any roads so that many of the villages were virtually inaccessible. The south, which is the Delta proper, consists of several hundred islands, with creeks running in between mangrove swamps and rivers and seas emptying into the Atlantic Ocean…

When Apostle Numbere started his missionary efforts, Nigeria was still in the immediate post-war era. Generally, the few roads that had been there had all broken down and were mere dirt tracks, which were usually muddy and impassable during the rainy season. The suburbs of Port Harcourt namely, Nkpogu, Elekahia, Rumuomasi, Rumubiakani, Rainbow Town, Rumuokwurushi and others, were not the towns they are today. They were villages and were hardly accessible. Even in Port Harcourt, the State capital, most of the roads were in a terrible state. You can imagine what it was like to travel in the State.

The situation was worse in the riverine areas. Transportation was still very much clumsy and expensive like it was in Numbere‟s childhood days. There were no bridges linking one island to the other so that the only means of transportation was by water using hand pulled canoes. A few years later came the era of speedboats which are still available till date. But these
speedboats are nowhere near the boats used in technologically advanced countries. The real engine-boats and sea-trucks are so expensive that they can only be owned by oil companies and the Government. The Nigerian speedboats are open boats and whenever it rains, passengers are covered with a big tarpaulin (canvass) sheet while the driver puts on a raincoat and stands in the rain to manoeuvre the boat. Those sitting at the sides of the boat would then hold the sheet down while the rest of the passengers would push it up with their hands so that they would not suffocate. They would then travel covered up like cargo and at the mercy of the driver, the only one seeing where they are going.

(Culled from “A Man and A Vision” a Biography of Apostle Geoffrey D. Numbere, by Pastor Nonyem E. Numbere)