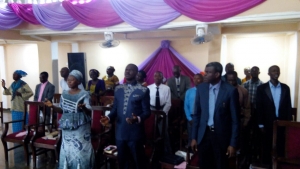 The International Director, Pastor Isaac Olori, was in Freetown, Sierra Leone for an administrative visit following the promise he made on his earlier visit in March. His visit was from Wednesday 31st August to Tuesday 5th September 2016.

During the course of this visit, Evang. Victor Ejimadu, head of the Missions team, taught about Partnership in missions, and Evang. Idris Samura Wright Joshua taught on the power of cooperation.