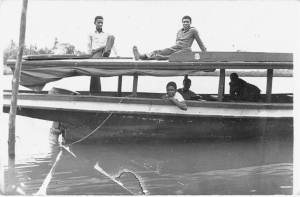 The fourth quarter sea campaigns, which lasted from February to May 1978, embraced a number of towns and villages in the Opobo and Nembe (Bayelsa State) axes. On the afternoon of 24th February 1978, the field team left Port Harcourt in their native boat for Opobo, passing through several creeks and crossing about three or four high seas via the Bonny River. The sea was very turbulent. The waves roared and roared and the sea swelled.

Their boat was tossed up and down, to and fro by the angry waves. Water was pouring into their boat and splashing on them as well. They were all drenched with water, their luggage including their evangelical instruments were all soaked.

Although it was not their first experience on the sea, it is not possible for one to get used to the dangers of the sea. If you remember, the disciples had experienced fishermen like Peter and Andrew amongst them yet in the face of a storm on the Sea of Galilee they were frightened. It was no different in the case of the field team. Fear gripped the hearts of many of them. The sea was so boisterous that they feared that their wooden boat would be ripped apart by the strong waves which lashed it mercilessly and continuously. All the time Apostle Numbere was right at the front of the boat, seated on the roof, drenched but taking authority over the sea, rebuking the wind and the waves.

At a point, when the Crusaders were right in the middle of the sea, it looked like the sea would swallow them up, but sudden courage surged into them and they all started singing choruses, worshipping and praising the Lord. Eventually, they had the victory, the sea calmed down and they finally landed safely at Opobo by 9:30 p.m. It was indeed a miracle that not only they but that toy of a boat had made it to the land safely. Apostle Numbere looked over the boat in amazement and in gratitude to God. “This is not a boat but a sea horse!” he exclaimed. Thereafter members of the field team changed the name of the boat from the humorous name of “MV GENC SEA III” (the third evangelical boat owned by the Ministry) to “SEA HORSE.”

Opobo, like other ancient towns, was strongly rooted in traditions customs and religionism and had ten different Churches including the Anglican Church, Roman Catholic Mission, Cherubim and Seraphim. The first ten days were used in crusading Opobo town and the other days they crusaded the other villages of Opobo kingdom, namely Kalaibiama, Queen’s Town, and Kala-ama which comprised of Opusunju, Minima, Okpukpo, and Strongface.

The Opobo crusades lasted for twenty-one days. Initially the people were very skeptical but God did such special miracles that they started rushing down to the Crusade ground every night. Right from the very first night people were healed en-masse and hundreds gave their lives to Christ rushing to the platform anxious to testify of their healing, including a fifteen year-old boy who was a deaf mute right from infancy. There was also the miracle of the rain stopping immediately Apostle Numbere rebuked the
rainfall, a fairly constant feature in their campaigns.

The presence of the Lord was so much with them that some nights people got healed as the servants of God sang and worshipped the Lord – no preaching, no prayers. Then one day a man with hernia and a big scrotal swelling (hydrocoele) passed under Apostle Numbere’s shadow and he got healed immediately. After this incident, the Lord also extended that anointing to the other members of the team. This again made great news in the town and people began to follow them wherever they went. On one occasion when they were visiting new converts in their houses, as their shadows fell on people who were following them, they got healed instantly.

Two of such cases were a man who had gonorrhoea since 1924 (fifty-four years!) and a woman whose menstrual flow had ceased for two years. As the shadows of the servants of God fell over these two they were healed instantly – the man’s discharge and ulcers dried up immediately while the woman’s menstrual period began to flow immediately.

(Culled from "A Man and A Vision" (A Biography of Apostle G. D. Numbere) by Pastor Nonyem Numbere) 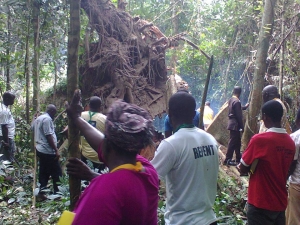