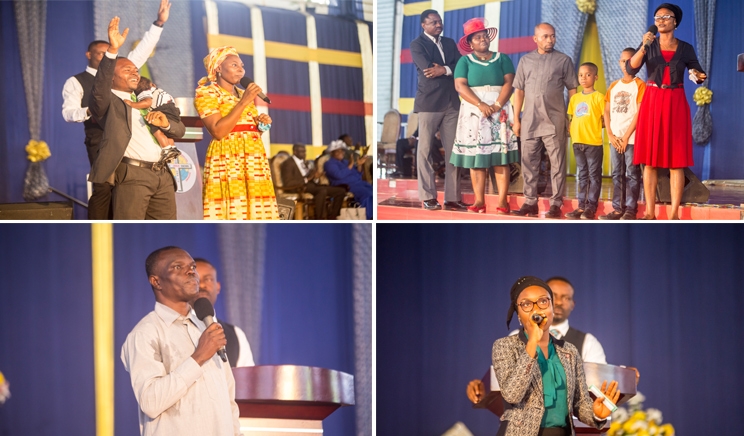 There were several testimonies at the August 2018 Healing Service that are worth mentioning. Some are listed below:

Safe Delivery: Tch. and Mrs Bob Festus from Rainbow Town Church testified of safe delivery after about three days of labour. Mrs Bob recounted how she started experiencing labour pain on the 3rd of May 2018, and was later rushed to Braithwaite Memorial Hospital. She was immediately admitted since the labour was progressive with the hope of delivery in no distant time. It so happened that delivery did not take place, and after the doctors had examined her, days later, she was advised to have a caesarean section. After consent was made for surgery, she was wheeled into the theatre. Situations arose that prevented the surgery from taking place. She was wheeled out of the theatre and she immediately felt like using the convenience. To God’s glory, she gave birth to her baby boy.

Discharged and Acquitted after 7 years:  Sis. Gloria from Ozuboko Church testified how her husband was held unlawfully in prison for seven years, but was discharged and acquitted. She explained how her husband was held at a bank where he went to carry out a transaction, being accused of car robbery. The owner of the car, who was a Judge said he looked like one of the robbers who attacked him and stole his car. All effort to get him released proved abortive and futile. Prayers and fasting were made on his behalf. After the June 2018 healing service, she prayed with her children at the altar, and in July, she repeated same thing. On the 31st of July, God intervened in her situation and her husband was released from prison, discharged and acquitted.

Deliverance from drowning: Sis Ibiye Owutubo from Mile 1 church testified how God delivered her from a Boat Accident. She described how after the children conference at Okirika, she had boarded a boat coming back to Port Harcourt and on the sea, the boat capsized. In this situation, her life jacket pulled off and all effort to come out from the sea were to no avail, as she did not know how to swim. She said the boat covered her and two babies and so it was difficult to be seen. Deep down in the sea, she remembered the God of mercy and cried out to Him for help, at this moment, she was already down in the sea. Suddenly a force pulled her out from underneath the first time and back into the sea, it also happened a second time. At the third time, God made the rescuers to see her, and they came to her rescue and that of the children.

To God be the glory, for the great things He did.

More in this category: « Testimonies from July 2018 Healing Service
back to top