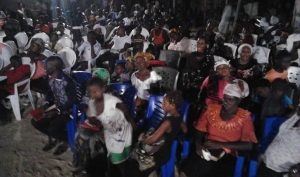 Fulfilling the mandate to make Jesus known, the Zonal Minister of Ogbia Central Zone, Evangelist Ogilizibe Sumbiri and his team lead a two-day gospel campaign at Akipelai Community in Ogbia Local Government Area of Bayelsa State. This program ran from Friday 17th – Saturday, 18th February, 2017. The mission and prayer team witnessed to the community from door to door, praying and proclaiming the ability of Jesus to save everyone.

Evangelist Cletus Okpu, the Superintendent State Minister (SSM) of Bayelsa State joined the team and preached on the topic “God’s love and faithfulness to forgive sins” (Romans 5:8). Illustrating from of his past life, he told how he was both a drunk and chain smoker but God demonstrated His Love toward him by saving and making him a preacher of the gospel. He also urged the audience to embrace the gospel that changed and transformed his life.

At the end of the message, an altar call was made and more than seventy persons gave their lives to Christ. Glory to God. 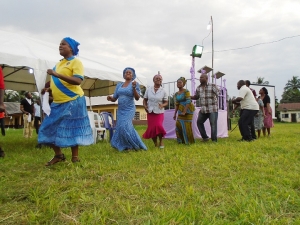 Day 1 of the crusade kick-started at 5pm. The speaker for the night was Evang. Victor N. Ejimadu and he spoke on the Topic: The Invitation. A total of 116 persons attended and 6 persons gave their lives to Christ including the Chief of that community.

Day 2 started at 5pm with Evang. Victor Ejimadu as the speaker again. He spoke on the topic “The God of Mercy” and there was a greater manifestation of the power of God with healing and deliverances this night. An altar call was made and out of the total number of 241 persons that attended the crusade, 104 persons were converted.

The speaker for Day 3 was Evang. Princewill Nkiri (State Minister GEWC Akwa Ibom State). He spoke on the topic “God can fix it”. There were special deliverance sessions for individuals and the community, using the Chief who was present as a point of contact. A total of 48 persons were converted that night.

The crusade also featured medical outreach and welfare services. During these outreaches 51 persons got converted as counsellors were on standby to minister to them before seeing the Medical Doctor.

To the glory of God, the first service of the new Church took place on Day 4. This was made possible through Elder Michael Akpan, a native of the community and a member of GEWC Rainbow Town church, who donated a land for the Church and also gave his newly built house to use as temporal church/parsonage while the church land is developed.  Also the Akwa Ibom State brethren donated some chairs and other items to start up the church.

Delivering the sermon, the senior Pastor of Rainbow Town Church, Pastor C. S. Ejimadu spoke on the Topic “Upon the Rock Will I Build My Church”. After the sermon 6 persons responded to the altar call.

It was indeed a huge success as the Church in Afaha Ikot Ebak has been established with 202 persons (children inclusive).