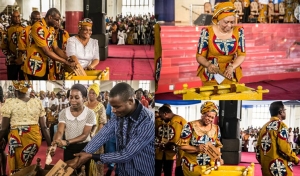 Give Me This Mountain: September 2016 Healing Service

Describing service this month might be a bit difficult because it was unique in its own way  such that even those who were in service lacked words to properly explain how they felt. It was like a well prepared three course meal with desserts and appetizers duly served; In fact we can describe it thus “...HE prepared a table before us…” It was indeed a blessed table. The anniversary celebration in combo with the monthly healing service was awesome. We had a perfect blend of traditional old school songs expertly delivered by the Jubilee Voices. These songs appealed not only to the older generation but was appreciated by the younger generation. Their ministration in songs took the older generation down memory lane as they reminisced on God’s faithfulness at the inception of the Ministry while it also stirred the hearts of the younger generation for the task ahead.

In commemoration with the 44th Anniversary celebration, testimonies of God’s faithfulness upon the Ministry were heard, specifically how the Ministry had impacted the lives of her brethren. Amongst others, we heard the testimony of Bro. Otense Okon who was bound by the spirit of drunkenness and fornication. He was also known for heavy smoking and fighting with dangerous weapons. But God led him to a branch of the Ministry where he heard the word and was convicted of his sins. Another striking one was the testimony of Bro. Monday who was the head of a major cult group in the State but was miraculously delivered through the preaching of a Pastor in the Ministry. He narrated how he terrorized the community where he dwelt and even conscripted members of that community into the cult group (See website for a detailed account).

God’s word was brought to us by the International Director, Pst. Isaac Olori. “Give me this mountain” (Joshua 14: 6 - 13). While describing a mountain, he made it clear that some mountains can be a barrier to us nevertheless anything put on a mountain is solid and can withstand difficult situations. Also, a man who is on a mountain is set high above others and would see farther than one who is on a plain ground or valley. He was keen to point out that, whereas the valley and plain ground are always on the receiving end, the mountain usually gives out – it is what flows out from the mountain that reaches the valley and plain ground.

From his analysis, Caleb understood that God’s inheritance for him was the mountain and he went for it not minding the challenge, hence we must realize that, in difficult times as this, it is impossible to serve God with ease but we must stir up our spirit to take up challenges. It is important to note also that even though it took 45 years for God’s promise to be fulfilled in Caleb’s life, he did not lose hope. This shows that time cannot invalidate God’s word.

In receiving this promise, Caleb exhibited these seven attributes;

In conclusion, it is expedient we know that our Christian life should make us work and not remain at ease. We should, as well, seek out our responsibility in fulfilling the vision of GEWC.

Once again, we give thanks to God Almighty who has kept us for 44 years.

Next Healing service holds October 23rd, 2016. Join us live via our livestream channel or audio link . 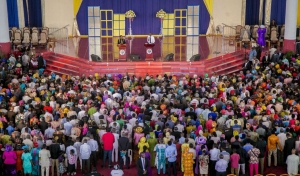 It was an expression of God’s power and might as healing, deliverance, miracles and salvation were evident in the August Healing Service. Jubilee Voices reminded us that the source of our strength is God, as He gave us peace from all our storms and all we could do was lift our hands in Total Praise to Him. Indeed God’s presence was manifested mightily.

To recount a few of the testimonies, Sis Juliet from Nkpolu church testified how God troubled the heart of a person who stole money from her apartment, as she forgot to lock her apartment when she left for the last healing service. This fellow was left without peace until he confessed his fault and returned the money. Also, Pst. Ikedichi and family reverenced God for delivering them from death.  First from a road accident which would have claimed the lives of the entire family. In his words, “…the accident was so fatal that it affected several other cars on the road, and I could barely make it out the driver’s seat but none of us was hurt”.  Secondly was the deliverance of one of his sons, who at the last minute, decided not to join a friend’s car. That car was involved in a ghastly accident which claimed the life of one of its passengers.