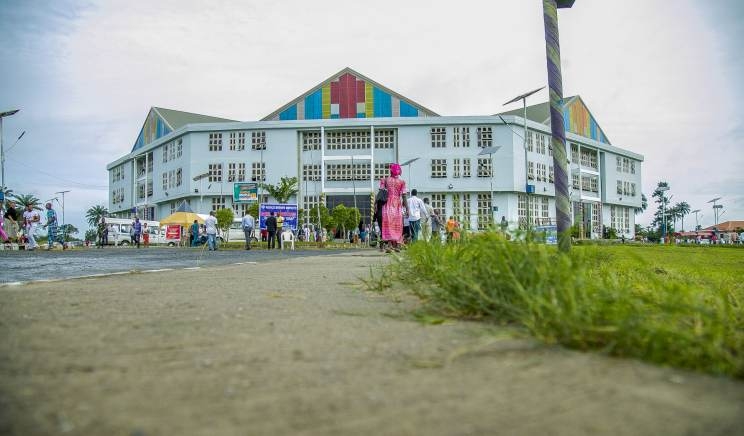 "A Basket of Miracles”: that was God's proclamation of the Greater Evangelism World Crusade headquarters through His servant, Apostle G. D. Numbere (Founding father, GEWC). The testimonies in the July 2016 Healing Service confirms this fact once again.

Bro. Godspower Harry’s (Read his testimony here) and Sis Lucy Albert, whose daughter was medically diagnosed to have stones, fibroid and a foetus in her womb in 2014, were clear evidence of His abiding presence.  Sis Lucy, whose daughter had experienced severe pain as a result of the stones and fibroid in her womb, chose to believe God’s word concerning the temple and brought her daughter to the temple to pray concerning the situation. Miraculously, God took away the stones and fibroid while the baby remained safe. It might interest you to know that this baby weighed 4.5kg at delivery and the mother did not have surgery.

Through song ministration, the Jubilee Voices led us into God’s presence as we worshiped Him, acknowledging Him to be our shield from all the threats of the enemy. God’s word was quick and powerful, brought to us through the instrumentality of His servant, Pst. Isaac Olori who considered Jesus: Our Good Samaritan with Luke 10:25-37 as text.This sermon exposed the relevance of God’s word to our well-being as Christians, and the emptiness in the heart of men, as many interpret God’s word to justify their selfish desires. This was the case of the Lawyer, who posed a question to Christ just to test Him. Nevertheless, we see Christ, ignoring his intent, but critically explaining the need for eternal life. His explanation revealed that personal study and understanding of God’s word is key to eternal life and our relationship with God. Hence, if you lack the revelation of God’s word, you lack the understanding of eternal life, as eternal/abundant life comes by an increase in the knowledge of God after being born again.

The second part of this message took its bearing from the question of the Lawyer - "Who is my neighbour?" Jesus, using the story of the Good Samaritan highlighted that the rift between the Jews and Samaritans did not hinder the Good Samaritan from rendering aid to the wounded fellow, neither did he see his own journey as more important than the man lying helpless as a result of the robbery attack. Pastor Isaac Olori highlighted that thieves in this context, could signify the enemy who has come to steal, kill and destroy (John 10:10), as a lot of persons have been beaten down by the enemy with sinful lifestyles and good virtues taken away.

Although it was the place of the Priest and Levite to render help to this helpless man following their position in society but they neglected him and went about their responsibilities. He further highlighted that these two (Priest and Levite) represent "Religion" and "Law", which have not perfectly aided the well-being of man. The Good Samaritan then represents “Grace” because he had compassion which the thieves, Priest and Levite did not have.

Hence, like the Good Samaritan, Jesus was moved with compassion and so gave Himself as a complete sacrifice for us. He is also willing to suspend anything to reach us. Also, like the Samaritan paid the bills of the wounded man, Jesus paid more than our debt as He purchased us with a priceless price, which is His blood, and deposited His Spirit inside of us (1 Corinthians 5:5) which is a seal of His ownership, hence we are untouchable.

Finally, we trust God to reveal Himself to you as you spend time to study His word.

Join us next service coming up on the 21st of August 2016 at our World Headquarters.

You can also watch our live services via our livestream channel or listen via our audio link.