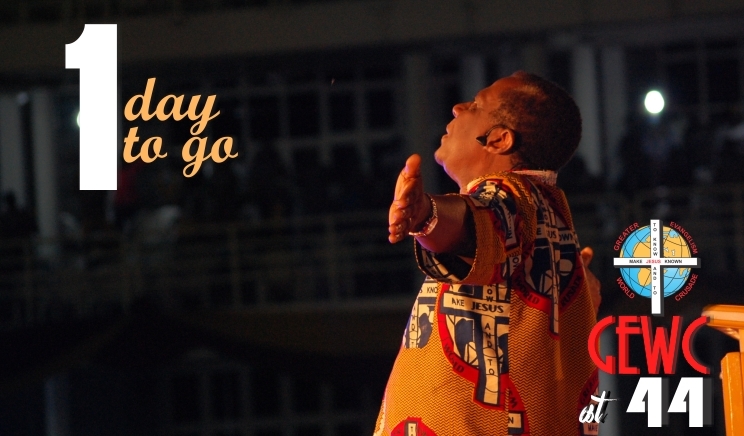 AS IT WAS IN THE BEGINNING:

The theme of this anniversary is, "As it was in the beginning." This is also going to be the theme for Greater Evangelism World Crusade in the year 2013. On this occasion of our Ministry's fortieth (40th) Anniversary, I deem it necessary to send you greetings and to CONGRATULATE you on the twin attainment of Age forty (40) and the production of at the least forty generations of Christians. Like any family, there are those who began the family line (progenitors) and there are those who were born into the family, generation after generation. That has been the story of GEWC forty years down the road (Sept. 9, 1972 - Sept. 9, 2012).

Though every year of these forty years has not been equally productive, no year has been barren of spiritual children. For this we are most grateful to God. Permit me in this address to eulogize (praise very highly) the original generations and therefrom to challenge the present generation. Over time, some of our brethren who were part of the original generation have gone home to be with the Lord, such as: Matilda Emmanuel, Sarah Darwin, Esther Alatoru, Victoria Lawson, Lolo George, Drucilla Kpabari, Matilda Edoo, Emmanuel Amabibi, Garrick Inomo, Rosamond Papanye, Settle Amachree, Millicent Loloo, Mama Hannah Emmanuel, Chief Paul Reuben Awo, Victoria Okonny, Alfred Cookey, the eleven brethren that drowned at the Degema hulk, Mammy Numbere (who produced me) to mention but a few. They have left indelible memorials in the annals of the history of this Ministry. They, like David, "- - - after they had served their generation by the will of God, fell asleep …” (Acts 13:36)

It is pertinent to state that what follows hereunder is by no means exhaustive of all the events and incidents that occurred. Time indeed will fail me to mention all the prices that generation paid - the persecutions they endured, the sacrifices they made, the humiliations and deprivations that were meted out to them and the privileges they forewent to sustain the Vision and Spirit of the Ministry. Some students were forcefully removed from their school, their parents denying them school fees. Some were thrown out of homes and jobs. Some young believers were chained and locked up in toilets and starved with the aim of breaking their spirit and thereby forcing them to decamp from the Ministry. Such parents were utterly disappointed. No sooner did they regain their freedom than they returned to Fellowship!

Wives suffered the indignity of being locked out of their homes together with their children. Others were divorced outright and their cars and businesses confiscated. Pregnant women were beaten, tortured and thrown out of their matrimonial homes naked together with their children, leading to their migration to other States where the brethren received them, clothed them, cared for them until they gave birth.

Parents came into Fellowships and forcefully pulled out their children, shouting, beating, kicking and stripping them naked at the same time. Some of them when they died, their corpses were forcefully seized by relations and given heathen burials which of course mattered nothing because "Precious in the sight of the Lord is the death of His Saints" (Psalms 116:15); and, 'The wicked is driven away in his wickedness but the righteous hath hope in his death" (Proverbs. 14:32). In the New Testament we read in Luke 16:22 "And it came to pass, that the beggar died, and was carried by the angels into Abraham's bosom; the rich man also died, and was buried." The souls of these saints are resting in the bosom of the Lord despite.

We were stoned, we were maligned, we were attacked with machetes, we were shot at with guns but God protected us. All sorts of juju and charms, and curses were thrown at us by medicine men, witches and wizards but such had no effect on us. These evil men and women were disappointed and frustrated together with their accomplices. Church and State accused us falsely as setters of confusion in society and slandered us greatly. We were rejected and abandoned by our fellow Christians. Some members of the Scripture Union (SU) of Nigeria in particular publicly denounced us and would have nothing to do with us. Other brethren had trials of cruel mocking and scourging, yea, moreover of bonds and imprisonment in Police cells. Yet others paid the supreme prize with their lives!

Once again I say, time will fail me to mention many more of the persecutions and indignities we suffered but endured. Suffice it to say that in all these things, the Lord saw us through without our faith shaking for one moment. We pressed on with the Truth in the midst of a perverse and crooked generation and we have continued to this day what we started forty years ago. The challenge to the present generation of Greater Evangelism World Crusade.

Henry Wadsworth Longfellow (1807-1882) in his immortal lines in his "Psalm of Life" wrote:

"A PSALM OF LIFE"

"Dust thou art, to dust returnest," Was not spoken of the soul.

2.    Not enjoyment, and not sorrow, Is our destined end or way;

But to act, that each to-morrow, Find us further than to-day

3.   In the world's broad field of battle. In the bivouac of Life,

Be not like dumb, driven cattle! Be a hero in the strife!

4.   Lives of great men all remind us. We can make our lives sublime,

And, departing, leave behind us. Footprints on the sands of time;

Still achieving, still pursuing. Learn to labour and to wait,

"One generation passeth away and another generation cometh- "says the Scripture. (Ecclesiastes 1:4). Verse thirty one of (Psalm 22:31) says, "They shall come, and shall declare His righteousness unto a people that shall be borne that He hath done this." Longfellow urges and I urge you too, let this generation, your generation, "be up and doing, with a heart for any fate; still achieving, still pursuing learn to labour and to wait."

God promises us help: "And even to your old age I am He, and even to your hoar hairs will I carry you; I have made, and I will bear, even I will carry, and will deliver you" (Isaiah 46:4) and in Malachi, "I am the Lord, I change not therefore ye sons of Jacob are not consumed" (Malachi 3:6)

I like the explanation given to Psalm 22:30-31 by Matthew Henry, [commentary on the whole Bible.] "That the Church of Christ, and with it the Kingdom of God among men should continue through all the ages of time is God's will. A seed shall serve Him; there shall be remnant, enough to preserve the Eternal Truth. They shall be accounted to Him for a generation. He will be the same to them that He was to those who went before them…” He has been so indeed to me from the beginning and up to this present day, for He promised me, "you are safe in all your journeys." God is a promise keeper!

Press on then, beloved, press the Full Gospel through to your generation as David did to his generation and as I your father, Apostle Geoffrey Dabibi Numbere did and it shall be with you “As it was in the beginning”.

"Let your conversation be without covetousness; and be content, with such things as ye have: for He hath said, I will never leave thee, nor forsake thee" - (King James version).

"Let your conduct be free from the love of money. Be satisfied with what you have for He has said, I will not give you up nor desert you" - (Modern Language version).

"Stay away from the love of money; be satisfied with what you have. For God, has said, "1 will never, never, fail you or forsake you" (The Living Bible version).

"Keep your life free from love of money, and be content with what you have for He has said, I will never fail you nor forsake you". (RSV)

How shall I express my gratitude to God for all His faithfulness to me? How best shall I conclude this address? I shall do so in the words of Isaiah the Prophet, "For thou hast been a strength to the poor, a strength to the needy in his distress, a refuge from the storm, a shadow from the heat, when the blast of the terrible ones is as a storm against the wall." (Isaiah 25:4)

I went to no man to launch or sponsor Greater Evangelism World Crusade Ministry. God alone who gave the Vision in first place did and He has been sufficient for all her needs ever since and He shall continue to be. (Philippians 4:19) "But my God shall supply all your need according to his riches in Glory by Christ Jesus." Yes so shall it be, in Jesus Name. Amen and Amen.

Culled from "Selected Sermons and Speeches of Apostle Numbere, Vol 1" compiled by Pastor Nonyem Numbere. For inquiries, visit our bookshop.

Apostle Geoffrey Numbere passed on to glory, October 14th, 2014. Before his passing, he named Pastor Isaac Olori as his successor. This appointment was done on 14th December 2014, during the thanksgiving service for the burial of Apostle Numbere.