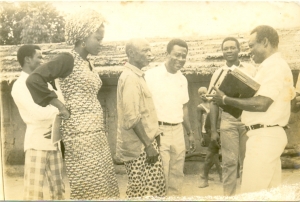 Geoffrey Numbere became miraculously born again on Sunday 11th May 1969 after a sermon by Rev. Mike Oye the then Travelling Secretary of Scripture Union, who had been invited to preach in the chapel that Sunday through the instrumentality of the President of the campus’ Christian Union, Philip Olurinola, (then Ogunrinola).

It was a very simple sermon, in which he narrated the testimony of his salvation. Later when Mike Oye made the altar call, Geoffrey, among a few others, went forward for the sinner’s confession and prayers. But he was not satisfied. After service, his friend came to call him for them to go back to the hostel but he refused. He was in an entirely different mood. He desperately wanted to “see” Jesus so he wanted to have a private talk with the preacher to help him find Jesus. This Scripture, “And ye shall seek me, and find me, when ye shall search for me with all your heart” (Jeremiah 29:13) came to be fulfilled in his life that day. Geoffrey stayed behind with one or two others to see Mike Oye. He moved over to him and said, “Sir, can I have a private talk with you? Can I see you for a few minutes, please?” Mike Oye was more than willing. He said, “Yes,” and led him into the vestry. The conviction of sin was heavy upon Geoffrey. There, with the two of them alone, Geoffrey began tearfully to tell Mike Oye about his life of sin.

“I was filled with guilt, guilt consciousness, I felt my sins were too many and too terrible for God to forgive. As I was talking about my life, I was completely broken emotionally. There was so much for me to say. I was crying so much that at a point I slumped on my knees on a nearby stool. My face was covered by my tears, I couldn’t speak again; I was a mere lump. At that precise moment, something happened. A gigantic black opaque screen dropped from heaven right down to the floor at the point where I was kneeling. It spanned both the eastern and western horizons so I couldn’t see the end to my right and I couldn’t see the end to my left. The entire screen was pitch-black. My eyes were closed as I was shedding hot tears but I could see that screen. And on this mighty screen I saw written every sin I had ever committed in my life, including the stolen Bible that I had taken to Church that day. I was not the one who stole it but I was an accomplice after the act and the Lord had judged me guilty.

Mine had been a fun-seeking, fun-loving life filled with fornication, lying, cheating, and murder (abortion). Even in my use of commuter buses in Lagos, I used to cheat. Whenever I boarded a bus and it was time to pay the bus fare, often I would pretend to be sleeping so the bus conductor would pass me by and would not collect any fare from me. In this way, I could move about town most of the time without paying bus fares, although sometimes I was caught. My sins were too numerous to mention and the entire screen was filled out. “Indeed our lives are being recorded by heaven. Everything about each and every one of us is on record; nothing is missed – what we think, what we say, and what we do are all recorded. I now understand the Bible statement about Belshezzar, King of Babylon, “MENE, MENE, TEKEL, UPHARSIN. Thou art weighed in the balances and thou art found wanting” (Daniel 5:25, 27). I saw my own record and it was bad, very bad. I was weighed and found wanting. It is only when we repent and turn away from our sins unto God that they can be erased and that, by the Blood of Jesus”.

When Geoffrey saw this vision, and all his sins outlined therein, he screamed, “IT IS TOO MUCH!!!” as if to say, “My sins are so many that surely God cannot forgive me”. He could no longer bear the burden of guilt and though he was still in the vision, he was shouting out loud. He did not know the Scriptures that the Lord is able to forgive every sin. In essence, he was challenging God by crying that his sins were too many and too heavy to be forgiven. It was like he was challenging God to prove His Word “Come let us reason together, though your sins be as scarlet, they shall be as white as snow, though they be red like crimson, they shall be as wool. (Isaiah 1:18).

As he shouted, “It is too much!!!” Immediately something happened to that screen. An unseen Hand came, like a tailor would with a pair of scissors, and ripped the screen into two halves from top to the bottom. One half was rolled away to the east and the other half to the west, far away from his sight. A light several times brighter than the sun shone right into his eyes and into his soul and draped him all over. His sins had really been as scarlet and red like crimson but God came down and proved Himself true to His Word – He not only washed, but also rolled his sins away!

Recounting this experience, he said, “With this experience something happened. The burden of guilt left me. I became very light in my heart, I felt clean within. I felt like I could fly like a bird. And a joy that I had never experienced in my life before filled my heart. As I was bathed in that bright shining light I was baptized with the Holy Spirit. The Word of God is true indeed. As the Lord says in Isaiah 43:25 "I, even I am He that blotteth out they transgression for mine own sake, and I will not remember thy sins!" He remained in that light for some time, savouring the presence of God, for how long he did not know. Tears were streaming down his face more than ever before, but this time they were no longer tears of sorrow and despair but tears of joy. He was so happy he started shouting, “I AM SAVED!! I AM SAVED!!!”