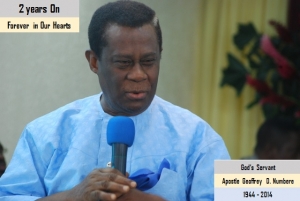 2 Years On: Forever in our hearts

The death of a saint brings pleasure to God for "Precious in the sight of the Lord is the death of His saints". Therefore, I do not fear death. – Apostle G. D. Numbere

From the moment Apostle Geoffrey Numbere gave his life to Christ in 1969, he experienced divine healing. He used to say he was never against modern medicine as evidenced in his marrying a medical doctor, Dr. Nonyem Numbere. He believed that God has also provided a means of healing through the doctors but had chosen to work with him in such a manner. So for 40 years, he never took any medicine not even a tablet of paracetamol. Yes, he would fall ill but would get healed in a matter of days and sometimes instantaneously. In the 41st year, he took ill and began several treatments for the next five years, and coming home with a clean bill of health from his doctors. He always said “no sickness can take my life except God permits”.

However, at the beginning of 2014, he had told his wife, Pst. Dr. Nonyem that God had given him 40 years to do the work and had graciously added another 5 years and so his work was done. This explained why for 40 years he hardly took ill and never taken any medications, not even paracetamol tablet but suddenly took ill at the 41st year. Early in August 2014, he also told his elder brother, Elder Humphrey Numbere that he had finished his work on earth.

As Daddy started reiterating the timeline God had given him, he suddenly took ill again but with no pain or discomfort to the amazement of his team of doctors. However, the Church prayed earnestly; men, women, elders, pastors, friends, teenagers including children. Our job as a family was to convince Daddy to stay on and agree with the Church but he never did. Rather, he began to give instructions on what should happen after he was gone. He also named his successor as Pastor Isaac Olori.

After much pressure, he reluctantly agreed to go for treatment but obstacles arose that made it impossible for this to happen. Little did we know that all these obstacles were put in place by God who had decided to call him home. Daddy, being one who listens to God, stood with God; just as he did when God first called him to leave school and carry out the vision, so stood he with God, when God told him it was time to go home.

Two days before he passed on, he said he felt very good and spoke in his native language Kalabari. When translated, this was what he was saying: “I felt like going. Did their car spoil? They have repaired it. Whatever happens to you people, you people should take it that way…” He was referring to the chariots of heaven that had come for him; obviously, the prayers of the saints had slowed them down. On Sunday, 12th October he said to Pst. Dr. Wari Numbere, his son and Dr. Mrs. Mabel Charles-Davies (his daughter in the Lord); “'a mu la té” meaning “I have arrived”. On Tuesday, 14th October 2014, in his semi-conscious state he screamed “I want to die; you people should allow me go!”

Like all great servants of God, he had actually started preparing us ahead of time, but we did not understand.  The celebration of his 45th Spiritual birthday was held from September 8th – 14th 2014. His book to celebrate his 45-year work titled “I Forgive, For My Sake”, he called “The Book of My Life” – it was his last. All his speeches during this celebration seemed like farewell messages. At the concert held in his honour he said, “Youths of Greater Evangelism, the Vision is now in your hands”. At the book presentation, he passionately pleaded, “I beg you, forgive one another, Jesus is coming”.

One of those days, while putting his house in order, he called his wife, Ps. Dr. Nonyem and his daughter, Tammy and instructed them to publish all his manuscripts that that was the means whereby God would restore His Church. We make a promise Daddy that we will do as you said. A foundation known as “The Apostle Geoffrey D. Numbere Foundation” has been inaugurated to sustain and continually promote his vision by publishing and distributing his manuscripts and other books. A memorial library will be built to showcase his works. Join us to immortalize this servant of God of our generation.

Indeed Daddy, you have fought a good fight, you have finished your course, you have kept the faith: Henceforth there is laid up for you a crown of righteousness, which the Lord, the righteous judge, shall give you at that day: and not to you only, but unto all them also that love His appearing. (2 Timothy 4:7)

Blessed be the Name of the Lord!

Four (4) of Apostle Numbere's books have been published since his passing: The Butterfly Christian, Look Up, Selected Sermons and Speeches by Ap. Numbere (Vol 2) and Vain Shows vs Practical Holiness.

Visit our bookshop to purchase your copy.