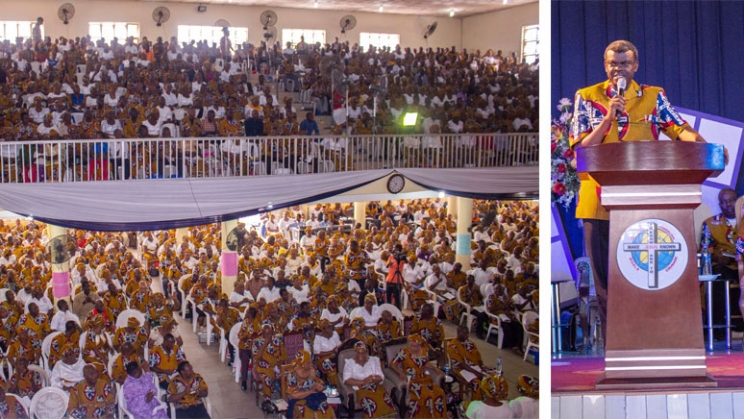 The 5th International Ministers’ Conference of Greater Evangelism World Crusade took place from 8th November 2016 to 13th November 2016, at Rainbow Church. The theme of the Conference was "The Challenge of Discipleship". Ministers came from Nigeria as well as other nations where Greater Evangelism World Crusade is established such as the United Kingdom, Benin Republic, Liberia and Ivory Coast.

Several pre-conference meetings of all supervisory Ministers and zonal ministers held with the International Director, Pastor Isaac Olori at GEWC Base Church from 8th to 10th of November.

The conference started with an opening ceremony on 11th November 2016. Rainbow Zone 1 women ministered in an indigenous medley. They sang with excitement, giving glory to God for the gathering of the ministers. The opening address was given by the hosting states of Greater Evangelism World Crusade, presented by Pastor Ibim Alabrabra.

The conference had several interactive sessions where issues were raised and the ministers were given opportunity to air their views. Also the conference allowed for the adoption and discussions of several reports. The ministers were taught on, the challenge of Discipleship, mentoring and coaching, performance and appraisal, crisis management and church growth, and many other topics.

An opening charge was given by the International Director, Pastor Isaac Olori, titled "Able Ministers". Here he told the ministers that they have been called to be able ministers and encouraged that they comply to the doctrines and policies of the ministry. Also that the ministers should adopt a Servant-leadership way of leading the members of the Church and this they can do by living by example.

On Saturday, 12th November, the President of Greater Evangelism Women Fellowship International, Pst. Dr. (Mrs.) Nonyem Numbere taught on "Ministerial Accountability and Integrity". She taught that accountability and integrity is expected of all ministers because the benefits are numerous some of which are: it helps keep the pastor/minister in check, it makes the pastor productive and it leads to the general wellbeing of the minister and his family.

Sunday the 13th of November, being the final day was a glorious service. The session of praise and worship brought some of the ministers to their feet and some to their knees as they thanked God for a wonderful conference. In this service, the Ministerial Advisory Council was inaugurated consisting of seven members Pastor Isaac Olori (the International Director) as chairman, Evangelist Y. D. Biliyock (National Minister Benin Repulic), Evangelist Cletus Okpu (SSM Bayelsa, Edo, Delta), Evang. Idris Samura (National Minister, Liberia, Sierra Leone), Pst. Ibim Alabrabra (SSM Rivers State, Akwa Ibom and Cross Rivers States), Pst. Taribo Manga (SSM, Lagos State) and Pastor Apele Iyagba (Secretary, Ministers’ Council). This body is to serve as the advisory council on ministerial matters in GEWC.

The International Director preached on, "Tapping Into God's Grace", with 2 Timothy 2:1-7 as its text. He taught that there is grace in Christ Jesus and that only those that tap into it can feel its impact. He said, God's grace can be tapped into by having a mind interested in the things of God, being ready to take a risk for God, having a ready heart and having the good hand of God upon you as it was on Nehemiah (Nehemiah 1:1-4, 2:1-5).

The conference ended with the ministers eating from the Lord's table (Holy Communion) with praise and thanksgiving to God.