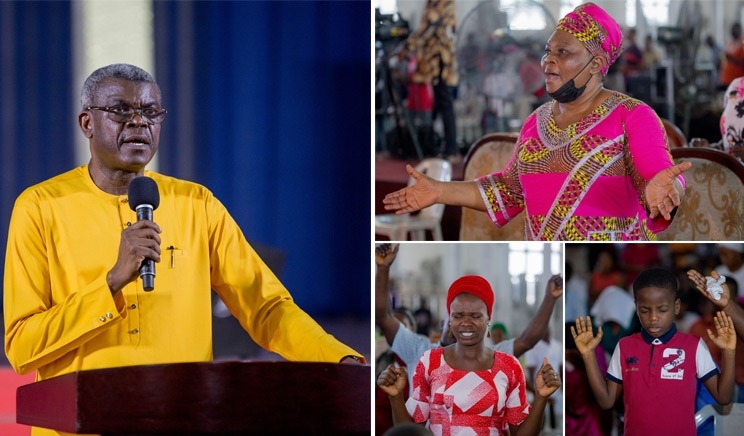 The 2021 Easter retreat of Greater Evangelism World Crusade started on the 1st  through 4th of April 2021 with the theme " ENCOUNTER OF THE CROSS". The retreat commenced in joy as brethren glorified God during the praise and worship.

The International Director, Pastor Isaac Valentine Olori, gave the opening talk titled: "Christ our Substitute" (2 Corinthians 5:21, 1 Corinthians 1:17-18; 15:22). He described a substitute as something that takes the place of another and Jesus took our place.

Some substitutes in the Bible include, Isaac whom God asked Abraham to sacrifice (Genesis 22). It was a costly sacrifice as Isaac was a child of promise after many years of barrenness. A ram was provided as a substitute for Isaac.  Another example was the Passover lamb (Exodus 12) which became a substitute for both man and animal so the angel of death passed over. Thirdly, was the parable of the good Samaritan (Luke 10:25 – 37), who provided for the wounded traveler on his own account. It was a picture of Christ coming for our rescue. All these were temporary substitutes but the real substitute was Jesus Christ (John 10:11).

Jesus became a permanent exchange or substitute for us by the cross (John 10:11). In 2 Corinthians 5:21, imputation was used to describe salvation. Imputation means adding something good or bad to someone's account. He explicated that two imputations were made:

Jesus volunteered to take up our sins and by this action, made us the righteousness of God (Hebrews 2:9, 1 Peter 2:24).  This righteousness can only be received and maintained by the cross.

Speaking further from 2 Corinthians 5:21 he said:

Concluding, he said, this was made possible through the cross. The cross procured righteousness for us.

More in this category: « Apostle Geoffrey D. Numbere: 6 years on! The Quickening Spirit: 2021 Easter Retreat - Day 3 »
back to top