ACTIVATING THE POWER OF YOUR CLOSET – April 2021 Healing Service 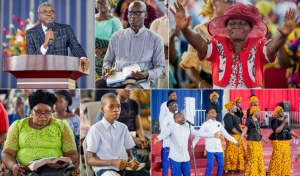 It was with great joy that we gathered together for the April healing service. With soul lifting praise and worship songs led by the Jubilee Voices, we gave thanks to God for His unending mercies. It was also a time of great rejoicing as we celebrated the 60th birthday of our leader, Pastor Isaac Olori, the International Director, Greater Evangelism World Crusade.

The Lord spoke to us through His servant, Pastor Isaac Olori on the topic "Activating the Power of Your Closet"   (Psalm 91:1).

To help us understand the closet experience, Pastor Isaac Olori gave various examples. First is the human conception and birth process, stating that every man before birth goes through the closet stage in the womb for the period of nine months where the child is formed and develops into a full human. Secondly, is the transformation of the caterpillar in the cocoon to become a beautiful butterfly. This is well illustrated in The Butterfly Christian by Apostle G. D Numbere (of blessed memory).

Another example was the temple in the Old Testament which had the outer court, the holy place and the Holies of Holies. However, even though these “chambers” were part of the temple, anyone who wanted to encounter God had to go beyond the outer court into holies of holies (closet).

He further explained that the closet is a place of privacy, and whatever blessings we attract as believers will be as a result of our secret prayers and service to God.

Concluding with the examples of Daniel (Daniel 6:10) who had an active closet that is, prayer life, Jehu (2 Kings 9:2-3) who was anointed in the secret place and the widow (2 Kings 4:1 – 7) who had to go into her home to pour out the oil, he stressed that an active personal prayer life is the solution to surmounting challenges, receiving the outpouring of the Holy Spirit and experiencing God’s hand in all aspects of our lives.

He urged everyone to make it a habit to consciously and constantly seek God in our private corners.

The Power Of His Resurrection: 2021 Easter Retreat – Day 3 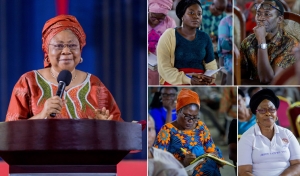 To wrap up today's teachings, the President of the women's fellowship of this great ministry and wife of the founding father, Pastor (Dr) Nonyem E. Numbere gave a talk on the topic “The Power of His Resurrection” (Philippians 3:10-11, Romans 1:3-4 and Romans 8:11).

Excerpts on her teaching can be found below:

Power comes from the Latin word, potere means “to be able” but things with power are much more than able – they are able to exert a lot of force (Vocabulary.com).  It also means “possession of control, authority, or influence over others” (Merriam- Webster dictionary); physical might.

The word, “His” in the topic refers to Jesus Christ, the Son of God, the King of kings, Lord of Lords and “the first begotten (first fruit) of the dead.” His death and resurrection form the bedrock(foundation) of the Christian faith. The atonement for our sins was done on the Cross but breaking the power of death and captivity to sin and Satan was accomplished by His resurrection. Alleluia!

Resurrection (Grk – anastasis) means “a standing up again” or “rising.” It includes not only coming back to life but a rising from the grave. There were a few cases in the Bible of the dead coming back to life e.g., the son of the widow of Zarephath, son of the Shunamite woman, the unnamed man whose corpse came back to life on touching Elisha’s dead bones, Jairus daughter, Lazarus etc., but all of them eventually died and returned to the grave.

The Resurrection of Jesus Christ is unique in that it is the only one without a human agent and is forever. He rose from the dead by the power of God and the Holy Spirit (Acts 2:23-36, Psalms 16:10, Romans 1:3 – 4)

Power was needed for Jesus to rise from the dead. It was an act of the triune God. One can therefore say from the above refs that the power of the resurrection came from God the Father, Jesus Himself. It was not possible for Him to be held down by death he also said that He had power to lay down his life and power to pick it up) the Holy Spirit.

The Cross and the Resurrection

On the Cross Jesus cried out, “IT IS FINISHED” (John 19 :30). The Greek word for this is tetelestai and it was a word that was used in several ways – a task was finished, a sacrifice offered fully, a masterpiece completed and in commerce it was often written across a bill to indicate that the bill had been paid in full. The Resurrection is the receipt to show that Jesus paid the price of our sins in full. And the evidence that God had accepted His work of redemption. The Resurrection is the hope of all believers that we too shall resurrect and live eternally with Christ.

What if Jesus did not rise from the dead? We will still be under the Law and offering sacrifices that cannot not solve the problem of sin and death. Satan would have been celebrating because there would have been no escape for man, but thanks be to God, an empty grave was there to testify that Jesus rose from the dead and the disciples were witnesses to that effect. Without it, Christianity is nothing (1 Corinthians 15:12-19).

Accounts of The Resurrection

Results of The Resurrection

Apostle Paul had experienced the power of Christ in his life and in his ministry, yet he felt he was not close to Him as he should. He craved for closer intimacy with Christ to experience His power fully and also to die like Him or have a joint partnership in His sufferings.

The resurrection power of Christ is not found in idols like the so-called anointing oil, or “die by fire prayers”, or in worldliness. He has made all provisions for us. It was finished on the Cross and exhibited by His resurrection.  Paul made his choice. What is yours?

Book Review – “I Forgive, For My Sake” by Apostle Geoffrey D. Numbere 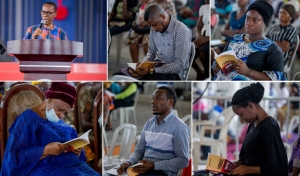 "Unforgiveness is a bait which Satan uses to trap people especially Christians".

The above is an excerpt from the inspiring book "I FORGIVE FOR MY SAKE" written by   Apostle Geoffrey D. Numbere (of blessed memory), Founding Father of the Ministry of Greater Evangelism World Crusade .

During the review, the book reviewer gave  a brief information about the author, Apostle Geoffrey D. Numbere. He was  born in1944 and ascended to glory in 2014. He was converted on May 11, 1969 and spent his life labouring in God's vineyard. The book was published in 2014 with 21 chapters and 194 pages. The foreword of the book was written by Dr Oluwafemi O. Martins of West Africa Theoretical Seminary (WATS) and a lot of comments written by different individuals.

Furthermore, Pastor A. Iyagba highlighted reasons why the author was the right person to write about forgiveness.

In addition, the book is necessary at this time because Easter is a time of forgiveness, the rapture is at hand and we cannot live a crucified life without forgiveness.

The power to live a life of forgiveness is only possible when we have an encounter of the cross.

Some highlighted lessons from the book are:

This book also covers the characteristics of a forgiving heart, gives in depth analysis on the amendment of laws in the Old testament and considers the blood of Abel versus the blood of Jesus. It also contains real testimonies of people who had to forgive, for example, a young lady who had to forgive her rapists and the killers of her family. 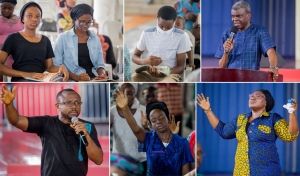 It was with great expectation, people gathered to get revitalized as the third day of the 2021 Easter Retreat commenced.

Giving the 3rd talk of the Retreat, Pastor Isaac Olori, the International Director spoke on the topic, “The Quickening Power” (Romans 8:1-11). He taught that it was the Spirit of God that raised Jesus from the dead and that is the same Spirit that dwells in us. The challenge we have is lack of knowledge that this same Spirit dwells in us that is why we live defeated Christian lives.

Defining quickening as - to quicken is to make alive, to give life or the inflow of divine life, he explained that this can be  seen in three ways

At  salvation, we are endued with life (Ephesians 2:1). There is a life a believer has that unbeliever does not have, that is the divine life (Ephesians 2:5). He stressed that one proof that you are born again is that you have been quickened that is, we have been given a different life that subdues the flesh (Colossians 2:13).

He stressed that the born-again believer was designed to live not by the dictates of the flesh but by the quickening of the Spirit. You cannot live a victorious Christian life without the help of the Spirit. It is the Spirit that quickens.

In conclusion, he explained the Secret of the Quickening (John 6:63). It is the Word of God – the quickening agent (Psalms 119:50). We need this quickening every day. 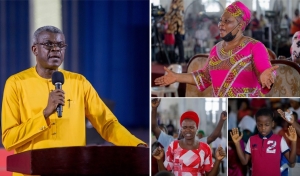 The 2021 Easter retreat of Greater Evangelism World Crusade started on the 1st  through 4th of April 2021 with the theme " ENCOUNTER OF THE CROSS". The retreat commenced in joy as brethren glorified God during the praise and worship.

The International Director, Pastor Isaac Valentine Olori, gave the opening talk titled: "Christ our Substitute" (2 Corinthians 5:21, 1 Corinthians 1:17-18; 15:22). He described a substitute as something that takes the place of another and Jesus took our place.

Some substitutes in the Bible include, Isaac whom God asked Abraham to sacrifice (Genesis 22). It was a costly sacrifice as Isaac was a child of promise after many years of barrenness. A ram was provided as a substitute for Isaac.  Another example was the Passover lamb (Exodus 12) which became a substitute for both man and animal so the angel of death passed over. Thirdly, was the parable of the good Samaritan (Luke 10:25 – 37), who provided for the wounded traveler on his own account. It was a picture of Christ coming for our rescue. All these were temporary substitutes but the real substitute was Jesus Christ (John 10:11).

Jesus became a permanent exchange or substitute for us by the cross (John 10:11). In 2 Corinthians 5:21, imputation was used to describe salvation. Imputation means adding something good or bad to someone's account. He explicated that two imputations were made:

Jesus volunteered to take up our sins and by this action, made us the righteousness of God (Hebrews 2:9, 1 Peter 2:24).  This righteousness can only be received and maintained by the cross.

Speaking further from 2 Corinthians 5:21 he said:

Concluding, he said, this was made possible through the cross. The cross procured righteousness for us.